This week’s release includes an initial implementation of appointment types, as well as an extension to the recently released “provider overlay” functionality in the schedule. Users now have the ability to create and manage appointment types and apply them to scheduled appointments. This is particularly useful for practices (or markets) that do not schedule appointments with specific procedures already planned. Once used for defining appointments, users can also apply an “appointment type overlay” to the schedule, which enhances the visual presentation of the Appointment Tiles in the Schedule Dayview UI. 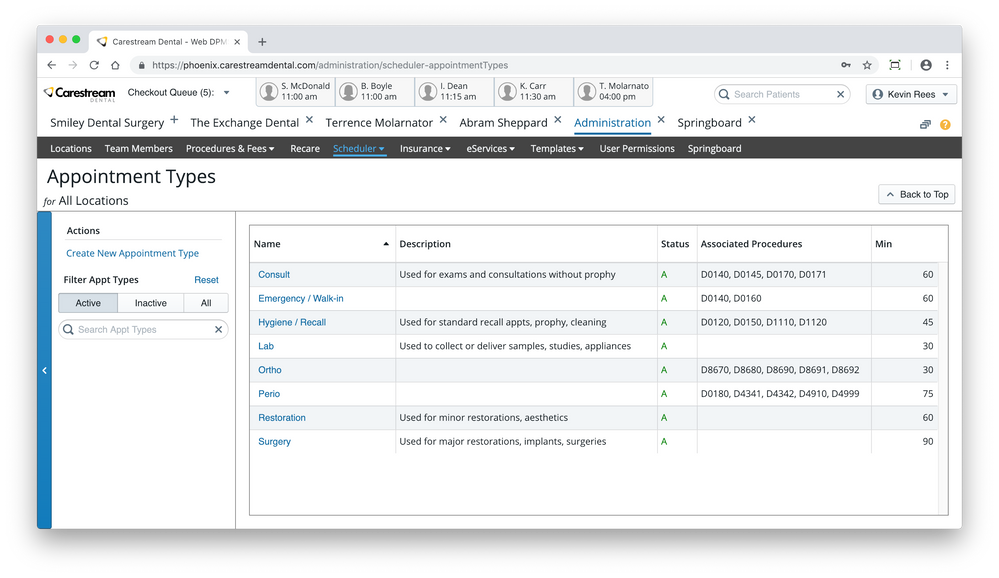 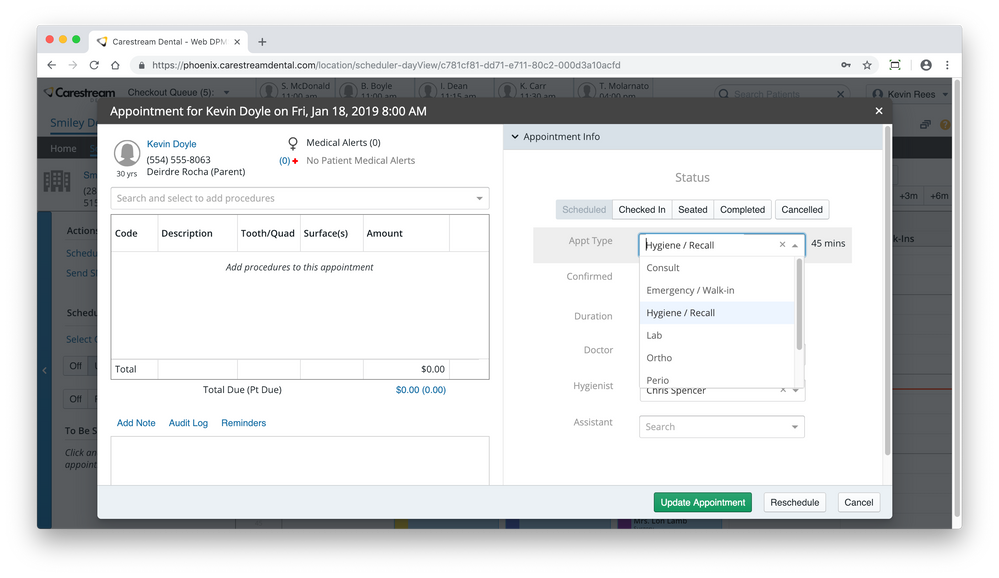 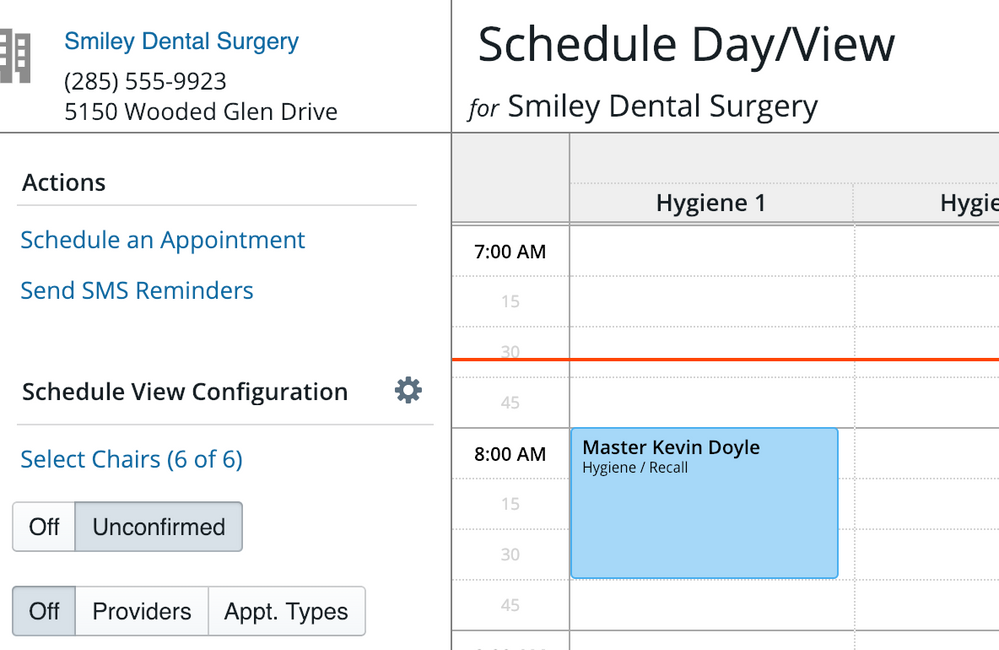 As with the previously released “provider overlay”, a strip of color is applied to the Appointment Tile that corresponds to the appointment type assigned to the given appointment. This will help scheduling coordinators and providers to more quickly process the day’s planned patient care activities. Users can turn on (and off) this overlay by using the side panel controls in the Schedule Dayview. A default palette of colors has been curated and assigned to the pre-defined appointment types, which the users can modify via the controls in the side panel of the Schedule Dayview. Both appointment types and their associated colors are globally managed across locations and users, so that all users have a shared understanding. 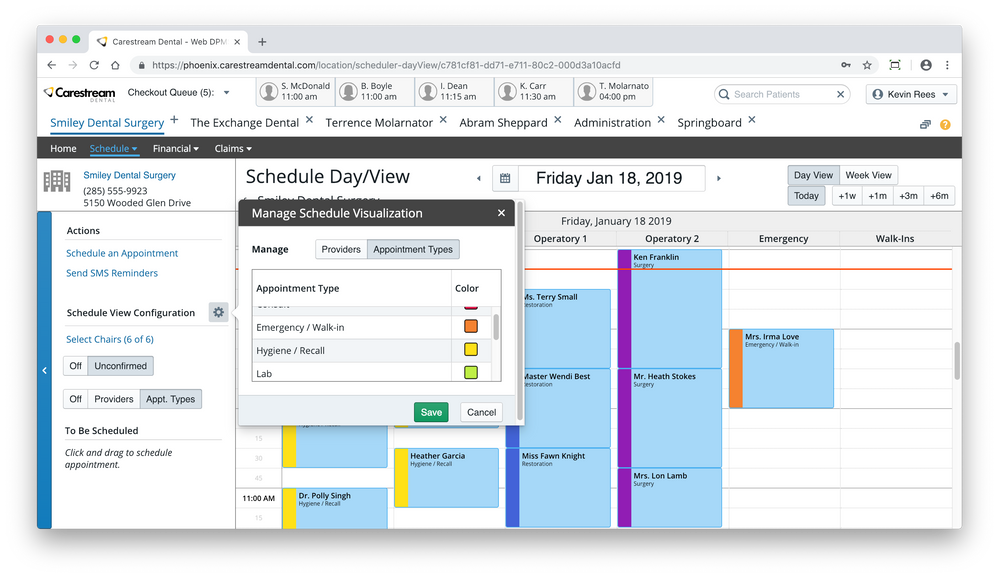 This is simply the first step in a more robust implementation of appointment types, which will be enhanced in future releases to support business practices such as block booking. Along with the recent “provider overlay” functionality, the appointment types solution will support a wider array of scheduling practices. Future enhancements may include enforcement of logical boundaries when scheduling appointments, such as violations of provider working hours or block booking rules.

This week’s release also includes an initial solution for insurance claim attachments, allowing users to manually add an NEA reference number to a claim prior to its submission. While this is only a temporary solution until the full integration with the NEA FastAttach service is implemented, it introduces some important workflow changes to the claims creation process that should be noted. In brief, claims are now put into a tentative “Awaiting Attachments” status to provide users with an opportunity to log into the FastAttach service, create a claim attachment record, send it to the payer, and then attach the NEA reference number to the claim in CMP before it gets transmitted to the clearinghouse. 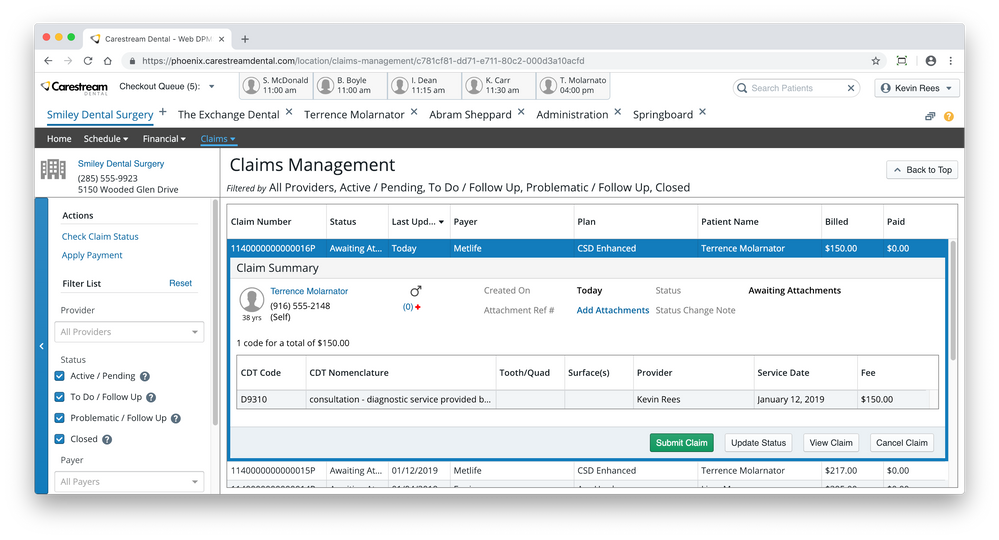 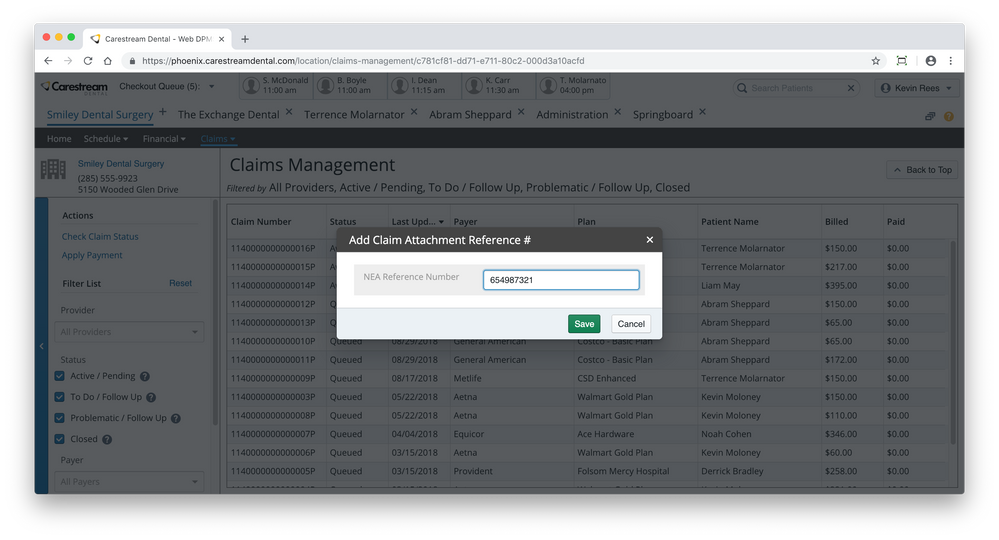 This temporary solution will effectively allow CMP users to submit claims that require attachments. In an upcoming release, CMP will include a full integration with NEA FastAttach that both detects when claims require attachments (or not) per payer rules and allows users to upload attachments to NEA FastAttach directly through CMP. This will be another large step in the support of key revenue cycle management workflows. We are excited to release this update to our customers and look forward to receiving their feedback.

Finally, this week’s release also includes some modifications to the Recare List UI, which were requested by our customer base. This includes some updates to the logic underlying that “Last Contact” column so that it now accounts for notes that are added regarding all forms of contact (or attempts) made when following up on recare appointments (e.g., phone, text, email, letter) in addition to actually sending a recare reminder. This also includes displaying the last (most recent) contact note directly in the table in the Recare List UI. These updates will help support workflows targeted at driving the practice’s recare business. 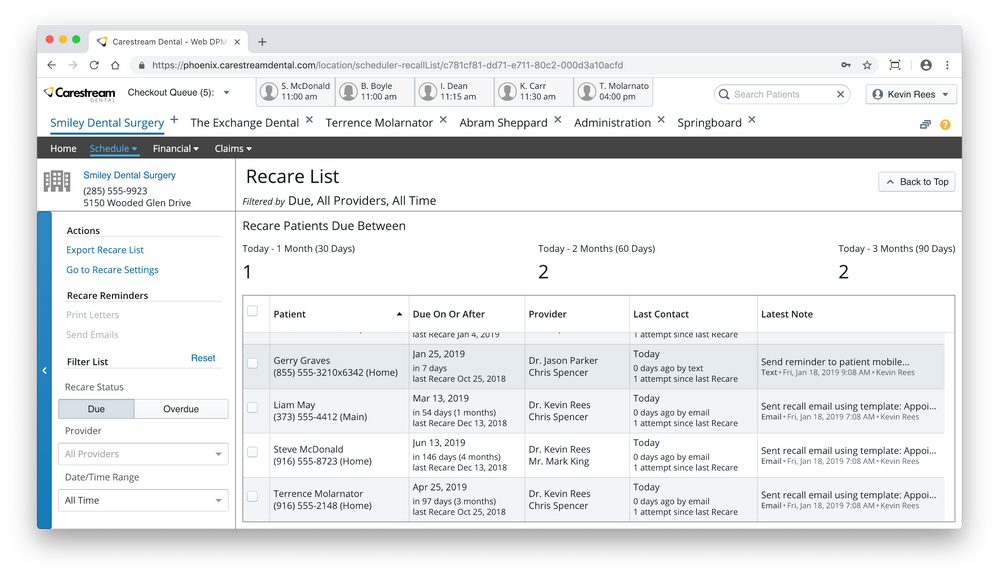 As mentioned, the Latest Note column now displays the last contact note entered for the patient. Additionally, the Last Contact column is also updated to reflect this latest patient contact event since the patient’s last recare appointment. This contact tracking mechanism will now account for both instances in which an email- or letter-based recare reminder was issued and when notes are added to document any more direct contact attempts such as phone calls or text messages. Together, these updates will allow the practice to more accurately track any attempts made to schedule the patient’s recare appointment.