I am wondering if we will have added a feature to be able to add a provider to the pre defined appt section. For new patients, for the hyg portion of the visit, since it still defaults to Dr I am having to change every line every time. This has become noticeable as there has been a wonderful uptick in the number of NP we are seeing.

As it is right now, the ability to pre-select the producer via the pre-defined appointments is not possible.

However, you mentioned that this would primarily be for the new patient/hygiene appointments.  the NPA/Recall appts producers are actually based on who is marked as the Recall producer on that patient's page 2 on their clipboard.

You can also mass change all the current page two recall producer settings by Going to the PracticeWorks Utilities and using the Change recall defaults utility. This is located by going to the Windows Start menu, go to the CS PracticeWorks folder, and click on Utilities. The Change Recall Default utility is the third option on the first column. 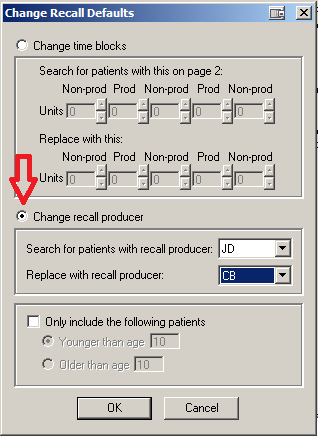 If you have any additional questions let me know