Sign In Help
Turn on suggestions
Auto-suggest helps you quickly narrow down your search results by suggesting possible matches as you type.
Showing results for
Search instead for
Did you mean:
Options
joedindo
Premolar III

When posting a claim, does PW factor in the "Individual maximum amount" when calculating the "Estimated payment"? 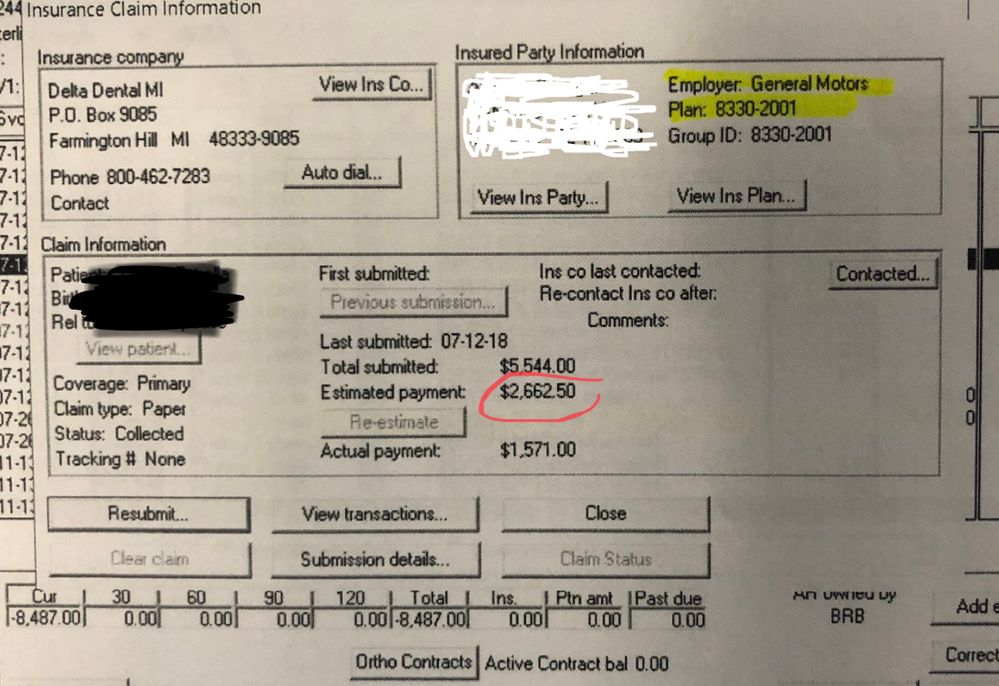 @joedindo - this has happened to our office more times than I care to count.  I have expressed multiple times that there is no reason we should have to "re-estimate" every time to make sure that the software is giving us accurate information.  Just fyi, we have found a few scenarios that are apt to give us this "greater than max" misinformation: 1) If there is a predetermination for the service that you have entered the approved amount for.  Practice Works completely disregards what the patient has left in benefits and instead uses the figure that was entered on the predetermination.  2) If the patient changes plans or insurance companies.  Practice Works will use the prior plan information until you click the "re-estimate" button as described previously.

2 Kudos
Share
Reply
joedindo
Premolar III
In response to sonyap
It's a good thing that this forum is here to help communicate these issues. I must say that I have so much more confidence that they are listening to us
1 Kudo
Share
Reply

@joedindo
When i tested the set up on mine where the patient had 1700 left in benefits, it did show that estimating would be at 1700

However, like @sonyap said, if the Tx plan had a pre-auth entered into it, it will pull from what was entered to be covered there and ignore remaining benefits under the assumption (which used to be more often true then not when this added to the software) that what the insurance company sent back as approved to be covered, already has them taking into consideration remaining benefits so it'll overrule what is shown in your data as remaining. so if they had 1700 left according to PracticeWorks, but the pre-auth says it covers 2300, it will show the 2300 being paid.

if the button is grayed out however, that typically would mean the claim was already cleared. It could also be because that patient was split from the original RP, so when you are trying to look at the information on the original RP's ledger, the estimating information isn't connected to it because the patient is no longer on that ledger. Just like after a split ledger, in order to resubmit claim, or post a payment on a claim from the patient that was split off, it will not allow it unless that patient is back on the ledger.

I'd want to take a look at it to be able to determine the actual reason though.

I'd like to get closure on this. Is this a bug that will be addressed or something else?

@joedindo Have you received any word on this?  We just had another patient get screwed (for lack of a better word) to the tune of $1400 b/c PW was estimating benefits he didn't have.  @robertangus was kind enough to look into it for us and he found what I had suspected.  He said it was due to an insurance rejection being removed but PW didn't process that information and re-apply the estimate for that treatment.  But now that I say that, the claim shows that it is still estimating for those services, so that doesn't explain what happened.

Regardless, when the patient came in, PW didn't have the right info, and now the patient owes $1400 more than we told him.....  THIS IS UNACCEPTABLE AND MUST BE FIXED!  It is not a new issue, and I fail to understand why it has gone unaddressed for so long.

0 Kudos
Share
Reply
joedindo
Premolar III
In response to sonyap
No word. It's a really bad situation and we are having to eat it on several occasions. It's not the patient's fault but it's not ours and yet we're left holding the bag. I appreciate that @robertangus confirms it's submitted to development but it's obvious to me that they are more focused on Sensei and the accompanying online products. Truly sad...
1 Kudo
Share
Reply

This issue has already been submitted to Development, unfortunately I do not have a timeline on when this will be addressed.

@joedindo I would like to know this as well.  It is BEYOND embarrassing (not to mention unprofessional) to have to explain to a patient that our software has a glitch and they now owe $500 more than we estimated.

We have NO pre-determination, and even if we did, it wouldn't matter - we actually stopped entering the approval information so we didn't get bit in the butt again as outlined in previous posts from this thread.

Our last totals recalculator and data integrity check were run on 9/2.  This patient was seen on 9/8.  @jdowner can you please explain WHY the estimator was calculating insurance benefits $458 MORE than her max?  She was seen only one other time this year - on 8/25/21 - and she did not change plans between those two dates.

@jdowner do you have any insight on this, given the information I've provided?

Just to make sure, have you tried clicking on the "Re-estimate" button just under where it shows the estimation?

Sometimes the ledger/estimating doesn't update itself correctly and can show wrong until you manually click the button.

I did this set up in my own data and it calculated the 1700 correctly.  Which is mainly what makes me curious about hitting the button to see if it'll calculate correctly.  If not, we may need to get in and look at everything.

That button is greyed out so we cannot do that.