This week’s release also includes support for the generation of pre-authorization claims as part of the creation of orthodontic contracts. This update provides you with a means of verifying expected insurance coverage before finalizing the financial terms and activating the contract.

You are now prompted to create pre-authorization claims upon saving a new or pending ortho contract, which contains at least one insurance schedule. The services (CDT codes) submitted on the pre-auth claim(s) are defined in the ‘CDT for Initial Billing’ (the ‘primary’ code that carries the contract’s fee) and the ‘Addl. CDT for Initial Claim’ fields. As noted in the dialog, it is suggested that you wait for the payer response before activating the contract. NOTE: Activating a contract automatically generates the initial service claims, thus negating any utility of unadjudicated pre-auth claims. Click ‘Submit’ to generate a pre-auth claim for each defined insurance schedule and to save the pending contract. As with general claim creation, notifications are displayed upon pre-auth claim creation. 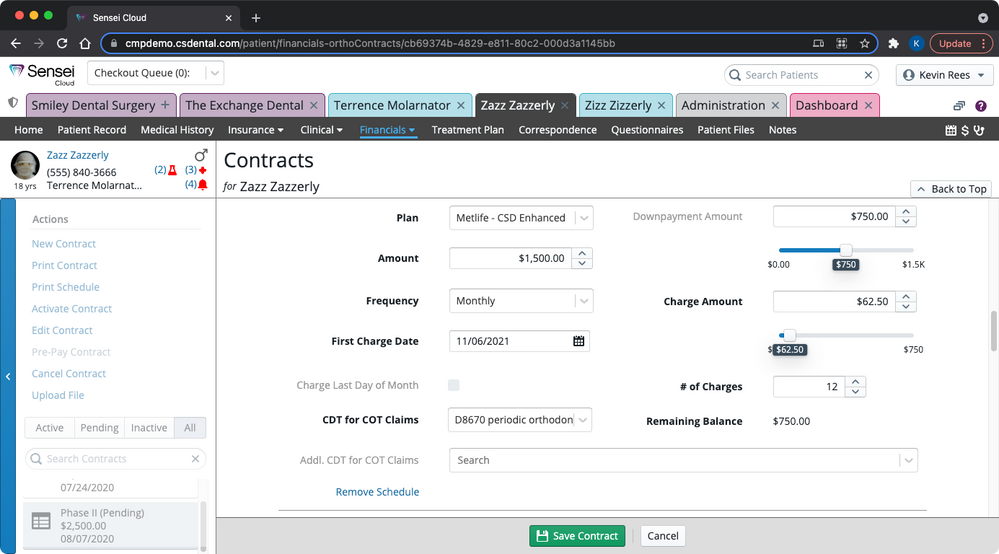 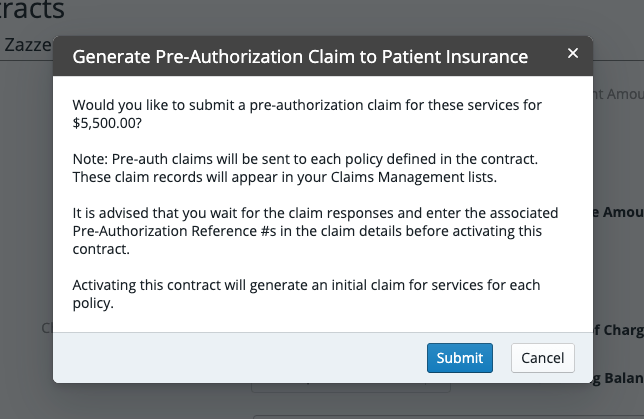 NOTE: If you click ‘Cancel’ in this dialog, you are prompted to activate the contract. If you click ‘Activate Now’ the contract becomes active, the initial service claim(s) are generated, and the initial contract charges are posted to the ledger. If you choose ‘Activate Later’, the contract remains in a Pending state. You can generate pre-auth claims at a later time by clicking the ‘Send Pre-Authorization’ hyperlink available in the ‘Contract Summary’ section of a pending contract. 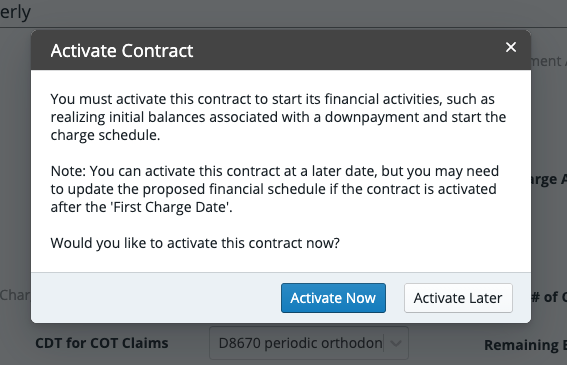 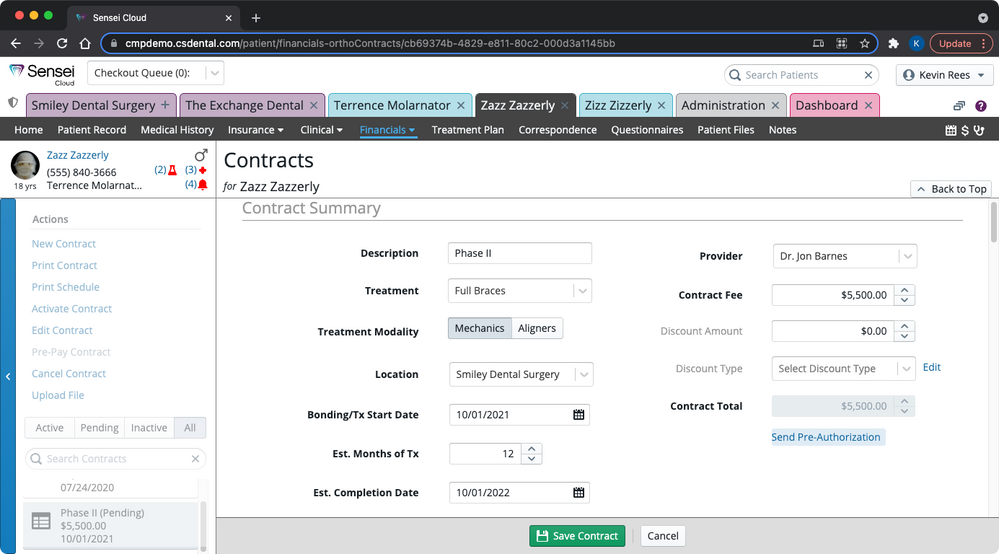 REMINDER: Pre-auth claims generated from ortho contracts default to a ‘Needs Info’ or ‘Pending Review’ status, depending on your configuration. This gives you the opportunity to define the additional details for the proposed treatment. Click on the ‘View Claim’ link in the notification displayed in the Ortho Contract screen when generating the pre-auth claims or navigate to the patient’s claims worklist [Patient Tab > Insurance > Claims Management]. Click the pre-auth claim to display its claim summary and then click ‘Edit Additional Info’ to define any remarks and specify the months of treatment before submitting the claim. Once the payer response is received, you can add the reference number to the pre-auth claim record (via the Claims Management screen) and then activate the contract. The pre-auth claim(s) details are included with the initial service claim(s). 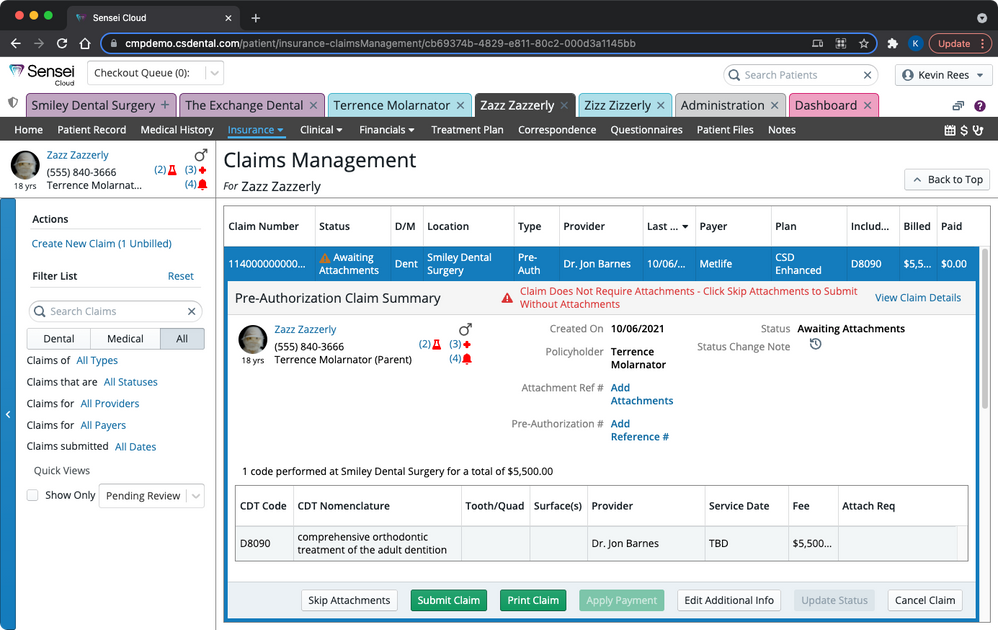 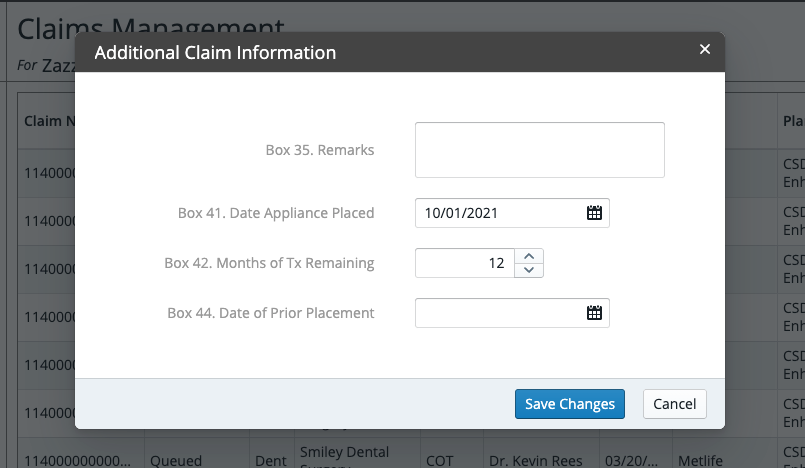 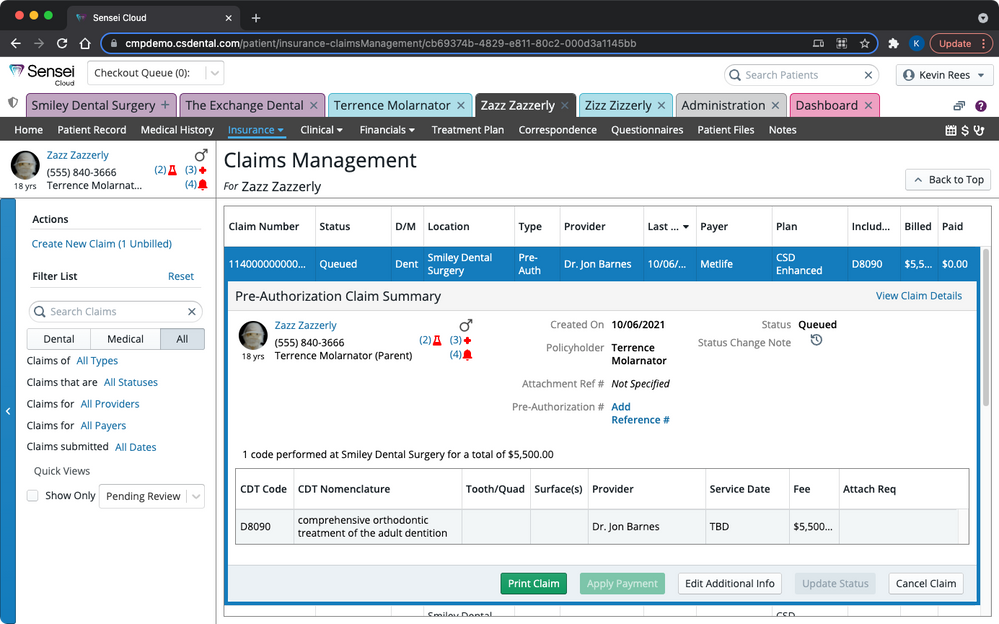 NOTE: You can re-generate pre-auth claims, if needed, to account for issues identified in the explanation of benefits you receive. Simply cancel the pre-auth claim via the patient’s claims worklist [Patient Tab > Insurance > Claims Management]. Then make any necessary adjustments to the patient’s insurance (via the Patient Record) or the contract details (such as the CDT codes to bill) and then click the ‘Send Pre-Authorization’ hyperlink in the contract. Alternatively, any updates made to the insurance policies or associated schedules while the contract is pending are reflected in the initial service claim(s) generated upon contract activation.

We hope that these enhancements provide support for your financial workflows and increase your confidence in the anticipated insurance coverage before finalizing the terms of the financial agreement. We look forward to your feedback on what works well and what additional enhancements can be made.

The following fixes and optimizations have been added to Sensei Cloud this week.