Sign In Help
Turn on suggestions
Auto-suggest helps you quickly narrow down your search results by suggesting possible matches as you type.
Showing results for
Search instead for
Did you mean:
Options
kevin_moloney
Moderator

In response to customer feedback, this week’s release includes the implementation of a new Springboard widget that tracks progress towards an NHS contract’s UDA target. This provides NHS practices with a simple, visual overview of a contract’s current status, along with a categorised breakdown of UDAs by NHS claim status. The new ‘NHS Contract Tracking’ widget makes it easier for you to ensure that you are meeting your contract targets, preventing any clawback of funds. 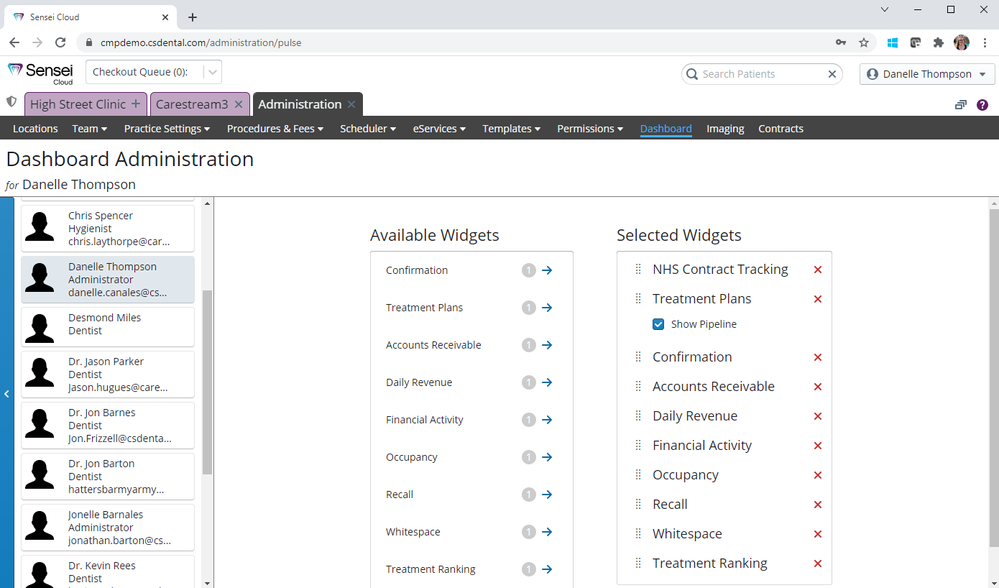 Following administration configuration, all team members with access to Springboard can further customise their individual views, reorganizing their available widgets and applying filters. Within Springboard, each widget can be customised using a set of contextually-relevant filters. Click on the ‘cog’ icon to display the widget’s available controls and use the filters to view data by provider, location, or time period, as appropriate. Some widgets also support the definition of a goal that can be further used to indicate whether the overall practice (or filtered location and/or provider) is meeting a specified target for the performance metric. Click the ‘cog’ icon again to hide the controls. 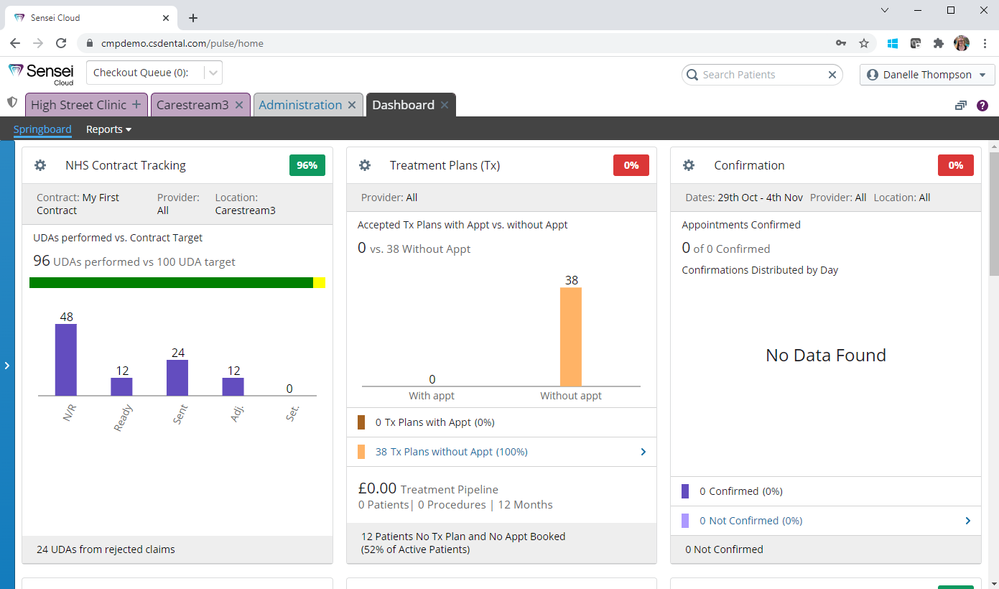 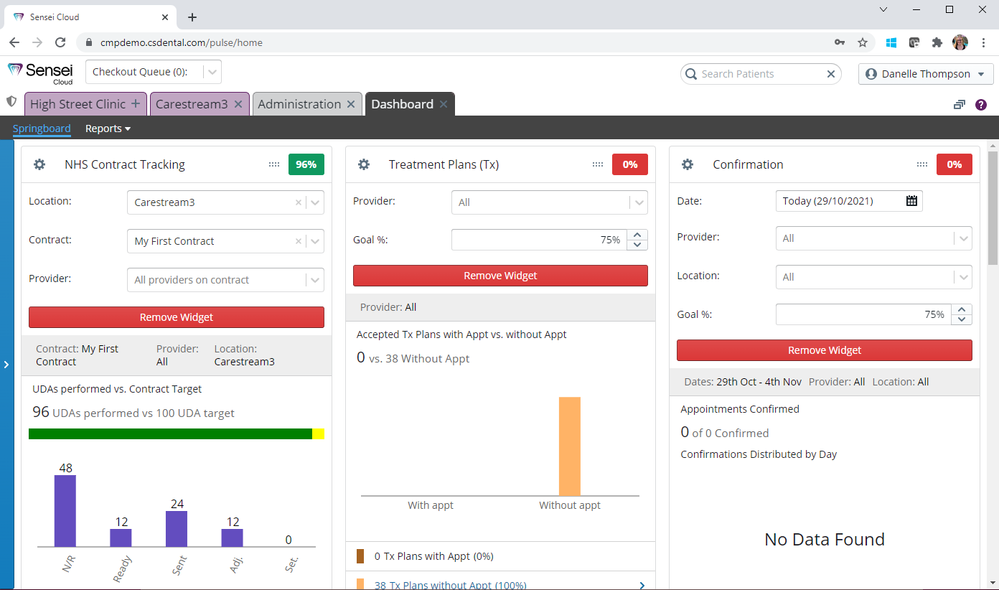 As previously mentioned, Sensei Cloud now includes a new ‘NHS Contract Tracking’ widget. This widget can be applied to any team member’s Springboard configuration via the Dashboard Administration screen [Administration Tab > Dashboard > {Select Team Member}]. As with all Springboard widgets, click on the arrow (in the ‘Available Widgets’ list) next to the ‘NHS Contract Tracking’ widget to add it to the user’s ‘Select Widgets’ list. NOTE: If the team member you are customising Springboard for is an NHS provider, an option to ‘Show all NHS claims data’ becomes available. Check this option if you want the team member (provider) to be able to view NHS contract data for themselves and any other providers (performers) on the contract. If you prefer that individual providers (performers) can only see their own UDA data, then leave this option unchecked. Additionally, providers are only able to view data for NHS contracts on which they are an associated performer. IMPORTANT: Non-providers (e.g., administrators) are able to see all contract and performer data by default. The same is true for any provider team members (whether NHS or not) that have access to the widget with this option unchecked. Simply do not add the widget to the Springboard for any team members that should not have access to NHS contract data. 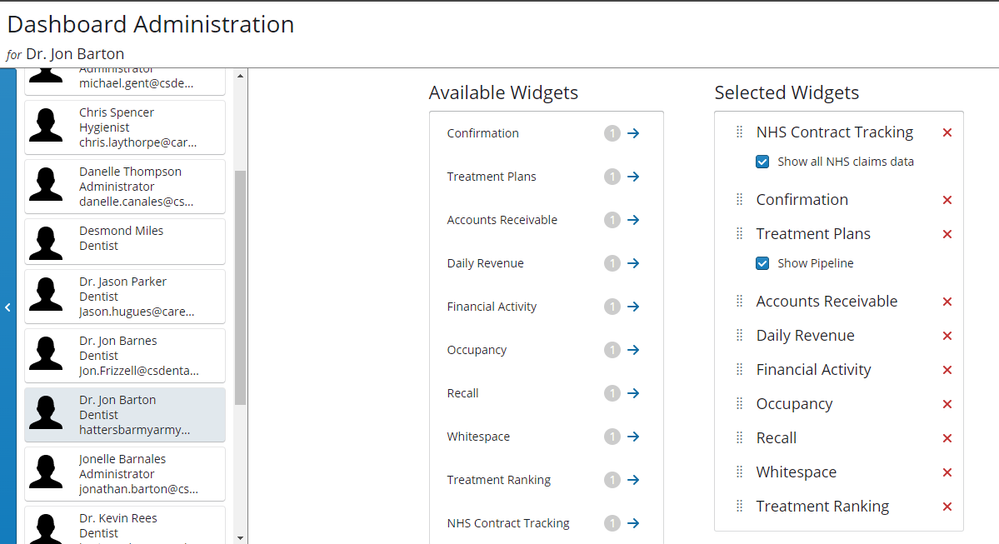 Click and drag (using the handle control) to change the order of the widgets when viewing Springboard. NOTE: Each widget can be added multiple times to the team member’s Springboard view. This is useful if the user would like to track multiple providers individually or monitor different NHS contracts simultaneously, without having to continually update the widget’s filters. The indicator in the ‘Available Widgets’ column updates to indicate how many instances of the widget have been added to the team member’s view. 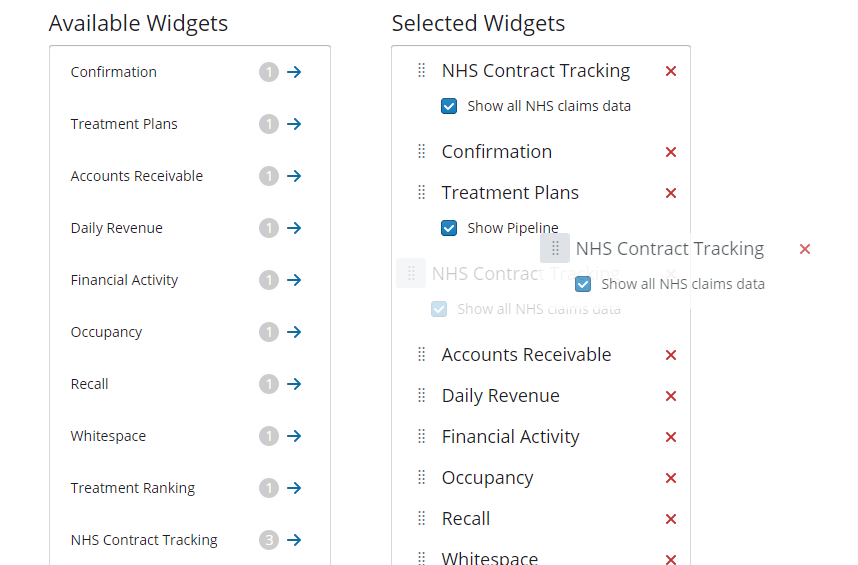 Once team members have access to the ‘NHS Contract Tracking’ widget, they can further customise each instance via Springboard [Dashboard Tab > Springboard]. As previously discussed, click on the ‘cog’ to access the widget’s available filters. You are able to filter the presented data to a specific NHS contract or a specific performer on an NHS contract. Changes to the widget’s filters are applied immediately, updating the data display of performed UDAs (and associated targets) based on the selected context. The current filter settings are displayed below the widget’s header bar after the filters are closed, so that the applied context remains readily visible. 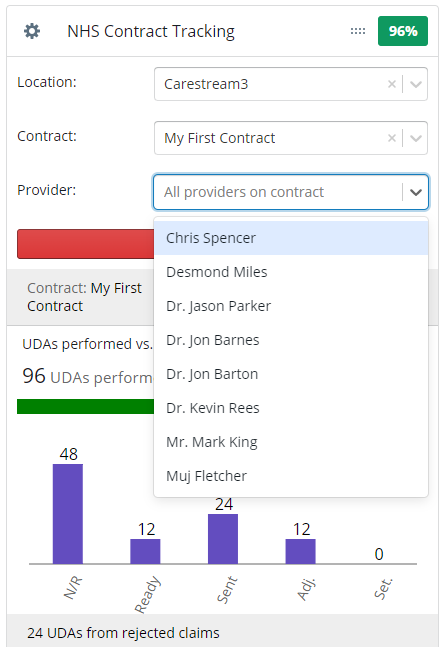 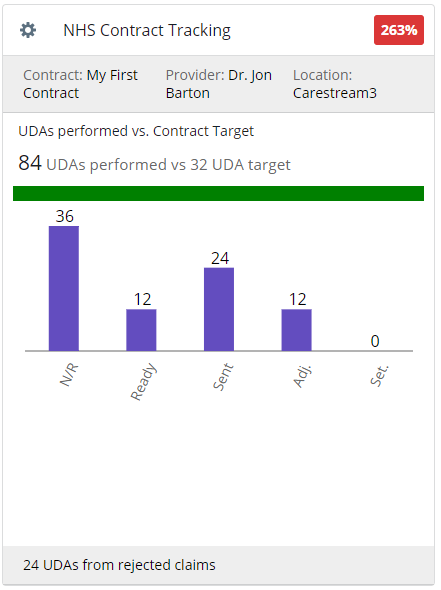 Key details of the widget are color-coded to increase its usability, making the status of the selected contract data view (e.g., contract and/or provider) readily apparent. The current percentage towards (UDA target) completion is displayed at the top of the widget. This indicator is displayed in red until the performed UDAs are within 5% of the contract’s (or performer’s) associated target. Once within 5% of the target (e.g,. 95 - 105%), the indicator turns green. Additionally, a clear, numerical summary of the performed UDAs versus the target is provided, along with a progress bar. As UDAs are performed, the bar becomes progressively green, indicating that an increasing percentage of the target UDAs (in yellow) has been fulfilled. 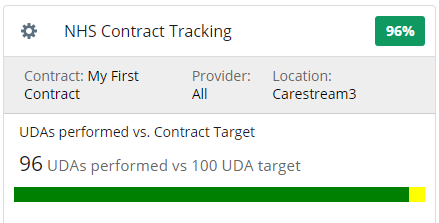 Below the progress bar, a summary of the performed UDAs is provided, broken down by NHS claim status. This includes all UDAs associated with NHS claims that are ‘Not Ready’ (N/R), ‘Ready to Send’ (Ready), ‘Sent’, ‘Adjusted’ (Adj.), and ‘Settled’ (Set.). Each of the bar graph’s status titles is a hyperlink that navigates you to the ‘Claims Management’ screen [Location Tab > NHS Claims > Claims Management]. The widget’s associated filters, including the contract, provider, and claim status, are automatically applied, making it easy to review and act on the associated NHS claims, as needed. In the case of the ‘Settled’ (Set.) hyperlink, you are redirected to the ‘Recently Settled Claims’ screen [Location Tab > NHS Claims > Recently Settled Claims]. Again, the widget’s relevant filters are automatically applied, making it easy to review the associated claims. NOTE: The footer of the widget includes any UDAs associated with rejected NHS claims, providing awareness of any work performed that is in dispute. These UDAs are not counted in the overall progress towards the contract’s (or performer’s) target. Once any rejected claims are corrected, resubmitted, and processed, these UDAs are then reflected in the status data. 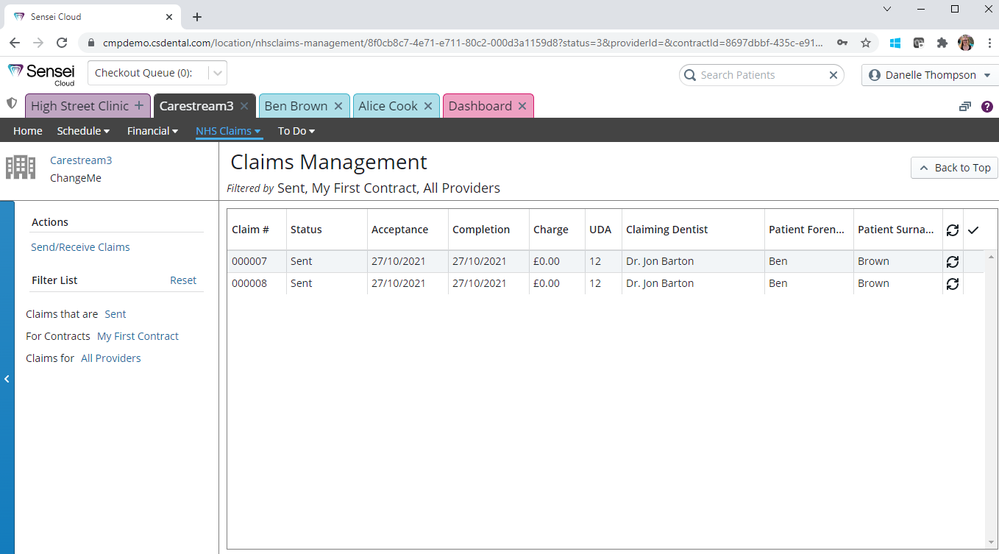 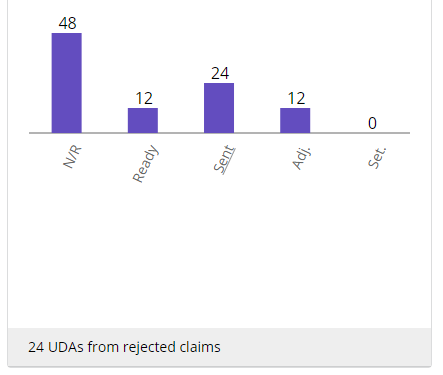 We hope that this new Springboard widget provides support to our NHS customers, making it easier to track the progress of their active NHS contracts (and contract performers) towards the contract period’s UDA target. We look forward to your feedback on what additional enhancements can be made to further improve your NHS claim tracking workflows.

The following fixes and optimizations have been added to Sensei Cloud this week.